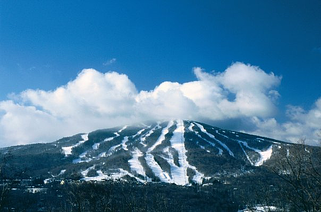 Yes, there's litterally tons of snow at Stratton
Definitely, the best snow in the East!
Yes, I will be snowboarding this Saturday.
Yes, I'm always available to do some turns.
Yes, a few of us Common Angels are there the 25th

The Boys on the Bench down at the general store are very, very happy. There hasn't been this much to talk about since the fight at the annual Bondville Fair over the winners of the truck pulling contest last August. The weather is the subject everywhere, and the boys are happier than when they're arguing on March town meeting day as the flatlanders hand out big buckets of cash to deal with the immediacies of plowing, shoveling and roof clearing. Like oil in Texas, when it snows heavily in ski country, everyone's happy.

Back in the world of Boston and NH for me and everyone I've talked to over the last two weeks, it has been really tough with too many ugly stories of roof leaks, car crashes and wasted time just slogging through the snow, ice and the wet. As I look at the USA Today weather map that comes up on my iPad every morning, I wonder where those global warming scaremongers are hiding. Probably still digging out from under a snow bank in Atlanta.

Preparation is the name of the game for dealing with all of this-or at least I thought. Last August, I looked at the checklist in the barn in VT and was happy with myself that the snowblower was sitting at the shop for its annual tune-up, the pallet of rock salt had been ordered for delivery in October, three shovels were neatly stacked on the wall, and the boys were set to arrive in October to put up the woodshed so that Tom The Wood Guy could deliver his normal four cords. Similarly, although it was harder to do deal with in the heat of August at the beach, by the end of September the NH house was totally ready for the onslaught of winter. The phrase of "Couldn't be that bad of a winter" kept rummaging through my brain, as I happily calculated snow averages, propane usage, wood storage and a variety of other now useless metrics. Bottom line: As a planning kind of guy, I was very pleased that my plan-of course-was perfect.

The emphasis here, of course, is on that key word, "was". The only thing still working from the original plan is the VT snowblower, which continues to do its heavy lifting although the electric start gave up the ghost during last Saturday's storm. The current casualty list for everything else consists of broken shovels, lost ice choppers, and we're now down to a few bags of rock salt and only one more cord of wood. Like everyone else, our utility bills, which have reached the national the debt levels of small countries, will require a restructuring of the household budget, and the really grit-your-teeth reminder is that it's only the beginning of February.

Last week as I dealt with the plowers, the shovelers, the roof scrapers, the plumber and, yes, the windshield replacement shop, I vividly remembered my undergraduate economics classes on the laws of supply and demand. With no rock salt or shovels in any Home Depot in Massachusetts or southern NH, it's no longer amazing to me what one will pay for peace of mind.

At the same time, I also relearned that my theories of preparation and planning are perfectly fine up to a point. And that point is reached when literally all of the best laid plans stretch and break. The Patriots learned that the hard way a couple of weeks ago against the Jets, and I re-learned it again last week in the two days of back to back storms. Preparation and formal planning are always perfect, except when none of the plans work.

But as New Englanders, we'll somehow struggle through this winter weatha, toughened (and just a bit crazy right now) souls that we are. I just want everyone to remember February when on July 4th, some genius on the beach says to you, "Hot enough for ya?"