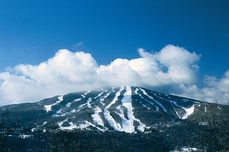 Yes, there's lots of snow at Stratton
Yes, I will be snowboarding Saturday.
Yes, the Mountain will be fully open by Christmas
Yes, I'm always available to do some turns.

As a Vermonter, with six generations of blood running through my veins, it's been tough, but interesting, to be away from the mother earth since April. Truth be known, although I've got five generations before me from VT and then my son, Joshua, was born here, I got left out during the war years with my father teaching at the naval air station on Lake Michigan. Hence, the south side of Chicago is where I was born, but I purposefully keep that dark secret hidden from the boys on the bench down at the general store in our little town of 647.

When the boys on the bench ramble on about their problems with the flatlanders, I just nod my head knowingly in agreement and quickly shift the conversation to talk about my great-grandfather, Horace, the railroad station master in Poultney, who lived just up the road a piece. Joshua doesn't have that problem since he was born here and although he and his wife and the beautiful granddaughter, Sydney, live in Brookline, he'll always be regarded as a Vermonter. Me, on the other hand, even though I've lived here in the woods most of the time since the 60's, I'll always have the flatlander label since, according to the boys, a true Vermonter needs to be born here. Ya just gotta love Vermonters!

Maybe that's one of the reasons for buying the house on the beach last spring and taking up residence there until this week. But, no, there's another reason, and I'll get to that in a minute.

But first, there was actually a third reason for all of the time away from VT in that my wife decided to have bilateral knee replacements this fall which put her rehabbing in the very civilized location of NH rather than our valley in Vermont where although we're just a mile down the road from the real world, we're more likely to see deer, bear, and coyotes than people. With her rehab now mostly complete, she and her wagon train of trucks and trailers headed west this week to take up official winter residence in what is already a snow-covered Christmas setting in Vermont.

For me, that means that the snowboarding season begins in earnest this Saturday at which time I'll immediately find myself two weeks behind the rest of my weird and equally addicted riding buddies who count not only their days on the hill but the number of runs while they scorecard the vertical feet at the end of every day. And people ask me why I don't play golf? After five months of hard snowboarding, I need both a physical and a mental break and the pressure of golf is just not going to do it.

And this gets me to the other reason for making the shift to the NH beach and away from my beloved woods in Vermont. Change, plain and simple. Just Change, with a capital "C", and the need to mix things up a bit. I truly love Vermont. It's literally in my blood and under my fingernails most of the spring. I wake up in the winter at 4:00 AM and go out and shovel snow before the plow guys come just to breathe in the -10 degree air, and I wouldn't have it any other way.

So, the rhythm now will be six months of appreciating the snow and another six listening to the waves. Throw in working in Boston, and change is all around me. My belief is that we all need to think about and create some aspect of change or otherwise, we'll start to look like and talk like those old guys that we saw at our reunion two years ago.

Whether it's change in one's living arrangements like we've done, or it's the change that results because you decided to take a cooking class this winter or study Arabic at the Harvard Extension School this coming spring or your plans to travel to Italy this summer, it really doesn't matter. What matters is that change matters.

As we wind down the year, it's the perfect time of the season to take a bit of self and work assessment and think through just what changes you're going to make in 2011.

I and all of the managers at the firm, wish you a very Merry Christmas, a happy holiday and a wonderfully restful time with your spouse, your partner and your kids. Enjoy some time off. You've really earned it this year!