I've been roaming the sales cubicles of lots of companies most of last week and this.  Probably 20 plus companies in 10 work days. Opening doors into the heads of heavy-hitter sales leaders along with young, hard working BDRs. Asking the tough questions of hard-charging, get-out-of-my-way 35 year olds and also to a few 55 year old trail-beaten veterans who still hang on to "the old days" of relationship selling. 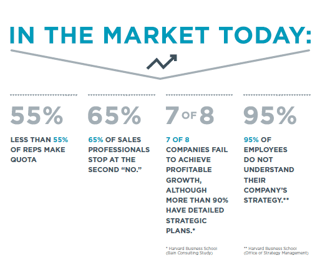 Before I go on here, no one has to tell me about how hard the job of selling is.  I know that and have had the privilege of both being a player, a manager and now a coach of "The Toughest Job" in any company.  I already know that, plus I also know that it can be the most rewarding job in terms of personal fulfillment way beyond the commission.  I also know, at this stage of my life, that adherence to Sales Basics, especially in an enhanced world of process, tools, technologies and metrics, is the secret to sales success and happiness.

What I also heard were lots of excuses.

In fact the same excuses I used to give back in the day, and have heard for 30 years of managing salespeople from raw rookies to experienced, battle-hardened warriors. 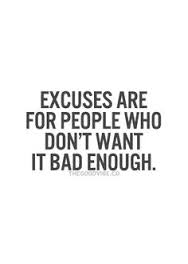 When a heavily experienced Regional VP gave me the excuse last week of "it's going to come in in the next couple of weeks", (but since we were in a public setting in the midst of 100 cubicles, and I could not put my hands around his neck), I responded "Will it come in by the board meeting in two weeks?", to which his counter response was "Yes, maybe by then?".  Last I looked, the word, "maybe", is right next to "hoping" in the untrained salesperson vocabulary.  Not very assuring!

I've been in the sales and marketing game for decades as a street guy, a headset phone reseller, a distributer of commodity products and as a regional sales manager, and as a CEO of multiple companies of complex tech and industrial products, and I've developed a highly technical term about sales management...

I've both said just about everything that can be said about sales and sales excuses, and whatever I haven't said, I've heard from other sales managers that I highly respect in this wonderful profession of sales.  The bottom line is that the failure point in the vast majority of cases of missed orders and failure to get to quota most always happens as a result of either the lack of experienced coaching from the front line sales manager or as a result of the salesperson's inability to follow a process and a toolset that they had already been trained in and agreed to follow.

I talked to 100 plus salespeople over the last 10 days.  The #1 reason given for a failure to meet quota was that the process for one or two large orders was "slowed down", "just delayed" or "hung up in either legal or purchasing".   As I quickly sifted through questions and answers about those delays, in all but one case, the salesperson admitted/half-admitted that they could have done a lot better job both in their initial Discovery Step and in continuing to do "Mini Discovery Checkins" after the initial Discovery.

A perfect example that I heard is that one very big order fell out simply because the key decision maker "went on vacation."  The reality of this is that vacations are typically planned long into the future, and the salesperson agreed that this delay could have been avoided if only she had asked that vacation question up front, which, it turns out was actually on her "Discovery Checklist" as part of her CRM dropdown menu.

Quota Improvement Corrections That You Could Make Today 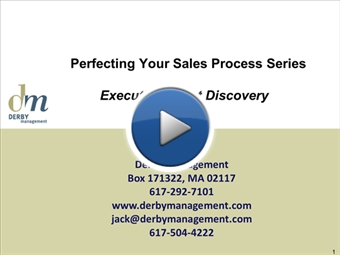 Every Sales Professional already has a Discovery Step either informally or formally.


When you analyze the data, do the math, and then take a look at the results from 100 feet off the deck, the reasons for not getting to quota are in some priority ordering of the following four reason...and #1 does not apply in this case.  After you've thought about this as it relates to your own sales or your own management of your sales team, a recommendation would be that you should objectively scour your own pipeline data for the past two quarters, analyze what your trends are showing and put an immediate personal corrective action plan into place that responds to those failure points in your current sales process.  Even if you're at 100% of your Q1 quota, you can always be better!

IT's time to TUNE UP YOUR OWN BUSINESS & MARKETING PLANS Also, since you've now completed Q1, you just may want to put aside a day during the next two weeks to refine and update your 2016 Business Plan, or at least your 2016 Sales and Marketing Plans.  To get you started, click here and receive a downloaded copy of our Writing the Winning Business Plan, 2016 edition.

Another opportunity for kicking off the quarter in the right spirit is to do the same type of "relook" at the basics of your 2016 Marketing Plan after reviewing our ebook on "How to Write a Marketing Plan". This consists of mostly solid basics and tactical structure stuff...which just might be the perfect thing to do right now before you dive too deeply into Q2.

...and, of course, if you just want to talk through some of where you are right now and use us as a confidential sounding board...or do a short Whiteboarding Session with any of us, just email me, and we will work out a convenient schedule.