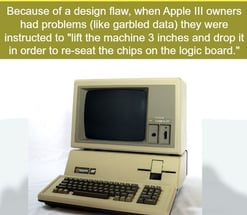 BITD, it was all about BANT  - Budget, Authority, Need & Timeline 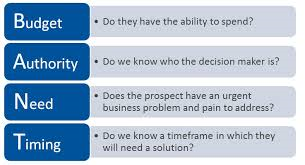 Back-in-the-day, IBM, without question, the best tech salesforce of the '50's and 60's, conceived "BANT" as a means of easily reminding their salespeople with this simple acronym to make sure that in their Discovery step of the very formal "IBM Sales Playbook" they went through each of the letters during their first sales call.

In the case of Honeywell's failure in the mini computer business, what they did not understand was that although there was a need for the architecture that CCC had been developing at that time, speed to market and availability of product, was much more critical.  By the time that Honeywell's slow management structure had completed their redesigns and implemented their antiquated manufacturing process from the staid heating controls industry, they had been leapfrogged by Digital Equipment and at least five other startups.  Game Over! 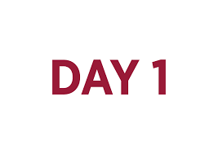 What if the 60 year old concept of BANT, which was just fine back-in-the-day, and most of us grew up using, were to be enhanced?  BANT by itself is just not quite good enough in today's much more complex, more immediate, buyer-focused world of providing real customer value.
What if, in the new world of selling in 2017, we were not so focused on our own products and services?  What then would be a better way to execute the Discovery Step in our sales process?

Created by our buds at Hubspot, and overviewed in this blog by Pete Caputo, the long time Hubspot VP of Sales, and now a leading sales consultant, the GPCT model provides much more granularity...and, most importantly, more comfort with the prospect...allowing more definition of the actual value that we need to deliver.

"Today, prospects are much more informed about you and your competitor's products and services, have identified their own needs, and started to design their own solutions -- all before even thinking about talking to a salesperson. According to a study by CEB, buyers are now 57% of the way toward a buying decision when they first make contact with a salesperson. Salespeople have no control in this situation ... unless they figure out how to add value to the prospect's decision making process. BANT isn't good enough anymore."
[Peter's 57% actually is the lowest number we have seen since we started studying improved sales processes 5 years ago. Data for the last two years from Forrester and from Sirius Decisions shows this number ranges between 67% and 73%]

Now you have a new formula, BANT + GPCT + C&I, a new tool, a new way of looking at not just your sales process, but a means of providing real value to your prospect and to your existing customers. Plus, the very fact that it's different and it's shiny and new is refreshing in itself as you change your own approach to this year.

It's Day1 today, and it's time, especially right now-here in the top half of January-to act on getting above the fray and look out for the entire year in your own planning, whether's it's to create a 36 month strategic plan for the entire business, or simply updated Key Account Plans for your Top 10 Customers / Prospects.

Some ideas on How to start your 2017 planning process?

...or just, even more simply, give us a call at anytime to talk through your 2017 objectives.  I and some of my partners have a wicked commute every evening (the cost of living on the beach), so we welcome the time just to talk confidentially at the end of a day.  Send an email, and we'll schedule you in.  Simple as that. No cost, it's confidential, and provides you with an opportunity for a sounding board.


Good Selling Today!
Everything we see around us says that 2017 is going to be a great year !