Trash or Treasure in Sales

...and then there's my day job

... working with a small team of similar-minded partners bringing science, processes, math, technology and metrics to dramatically improve sales and marketing productivity among a very diverse set of markets and a large number of middle-market and emerging customers.

The very interesting news is that everything seems to work seamlessly together, making the entire fit very productive.  For example, teaching at Tufts brings case studies and marketing plan development requests from our customers into contact with eager students who get real-life internships and are graded equally by me and the senior management of their project companies.  The NH beach and VT woods provide retreats for me and large handfuls of my alums to further our discussions on careers.  Hubspot, one of our customers and partners, provides the technology platforms and tools for teaching my students, and dozens of my alums end up working there and also at their project companies.

And, on and on, so that the result becomes a treasure of integrated processes, enthusiastic energy and common handshakes such that everyone who works hard wins in the process.

As often as possible, on those few workdays when I'm not driving into Boston wicked early, I make sure that I'm out walking/running/jogging on the mile-long beach at 5:00 AM always with one eye looking down at the tide line for beach glass and other assorted treasures washed up from the night before.  By this time, my house is filled with jars overflowing with beach glass of every shape, age and color including the much sought after and very elusive red.

Early in my living on the beach and during one of those early morning searches, the result was the finding of a large solid gold and diamond necklace wedged deep between tidal rocks that were rarely seen except at very low tides.  The estimators at auction said that it had probably been in the ocean for decades.  Certainly, an unexpected treasure, that arrived at a perfect time.  I guess that if I had  been a salesguy on quota that day, I would have called it "a bluebird". 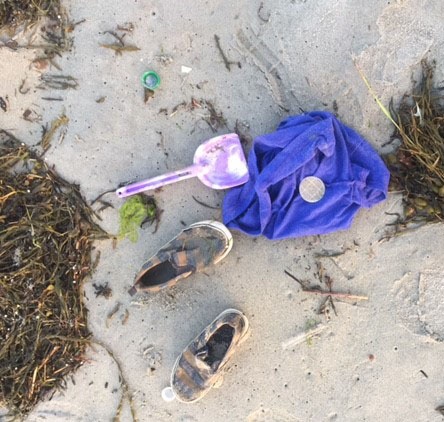 In my seven years now of living on the beach, I have only had one bluebird...that one necklace.  During that same time, I've picked up literally thousands of pounds of trash of every conceivable shape, size, color and material.

This picture to the left, that I took this morning, contains the standard left-behind clothes, two varieties of bottle tops, a kid's shovel, a pair of forgotten shoes and a plastic disk (the white circle on the blue T shirt).  That disk is left over from a mistake made by a water purification facility 20 miles away that released tens of thousands of these disks by accident four years ago.  And still they show up, even after the federal and state governments were called in to clean up the beaches at the time of the inital incident.

It's now estimated at the current course and speed of accumulating beach and ocean trash, that by 2050, there will be more plastic trash in the oceans around the world than fish.  Already there are hundreds of square miles of stagnant plastic trash sites in the ocean that due to the lack of currents and winds just sit there...waiting, going nowhere...and just pulling in more trash. 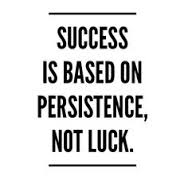 After years of tolerating these examples of poor sales performance and doing an equally poor job of installing various CRM systems and other quick fixes, we are finally right at the beginning stages of a revolution in sales and marketing productivity.  The actual revolutionary drums started beating five years ago, but have gained huge velocity in the last two years with increasingly smart CMS and CRM platforms.  These highly integrated platforms, from companies such as Hubspot, are now being coupled with Artificial Intelligence in a dynamic environment of coaching our sales reps with improved game plans, formalized processes and metric-driven tools that focus on selling value to our customers and not just products.

In 40 years of selling products ranging from critical care devices to ski jackets and managing thousands of salespeople, I've never been this excited about the opportunities to potentially increase sales productivity by 25%-50% in a very short period of time.  Equally exciting is the opportunity to provide our sales professionals with highly productive tools that they can use to pick out the treasures and leave behind their own trashy and unproductive bad habits.

Enjoy the weekend, and if you're out on the beach, keep an eye out for those treasures!

Think About Applying for our Sales Management Boot Camp

As a Sales Manager, at any level, if you want to learn more about how to join in the sales productivity revolution, you should think about attending our next Sales Management Boot Camp on October 1st. These always-sold-out, highly unique experiences have received hundreds of very positive testimonials.  Click on below, and then give us a call to answer questions and hopefully sign you up.