Saturday morning found me at the Winhall General Store in downtown Bondville, Vermont (pop. 647) talking with Red, who was out reading the Brattleboro Reformer on the front porch bench, along with his yellow lab, Blue.

Another perfect day in paradise, and for me a perfect day to "get things done".  "Getting things done", is what promoted me on Friday afternoon to load up the car with cats, equipment, bags of Home Depot garden rocks, and, most importantly cases of cheap red wine, and make the trek from the NH beach to the VT mountains.

Can't get there from heah! 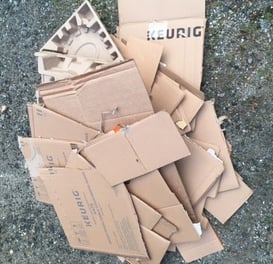 "Things-to-Do-in-Vermont", resulted in The-24-Hour-NH-VT-NH-Run, so bright and early, following the requisite breakfast sandwich at the general store, the tasks began.  Work-Work tasks came first, of course, before the complicated task of setting up the new Keurig.

Gotta love the Keurig guys, although the over-packaging was a bit too much, even for me, but I love the company and the coffee.  We worked with the Keurig team when the total employee count was sub-10, and the vision was driven by strong entrepreneurs with a long term vision, along with the funding fueled by the genius of the investors at Memorial Drive Trust.

After completing three other easy tasks and consuming two cups of Kenya Bold, I found myself on my hands and knees beginning the numbing task of the hand-sanding-staining-waterproofing of the front door sill.
Three hours of inch-by-inch sanding with four grades of decreasing grit sandpaper was only interrupted by...

In a world where ordering over-packaged, FedEx-delivered commodities by typing into Google or asking one of my three inter-wired Alexas to do the heavy lifting for me, I rarely venture out anymore to "go shopping".  Articles abound from the WSJ to Business Week to Forbes about the declining impact of retail stores in general and the hollowing out of malls everywhere.  For example, Sears (they should just shoot it and get the agony over with) just announced over last weekend the closing of yet another 43 of its stores.

So, in this one-click, one-voice Amazonization of buying and selling stuff, who would ever have thought that Jerry, the door-to-door bible salesguy still existed.  And, yet there he was, hand extended, walking up to my front door with the still-unfinished sill on Saturday morning dressed in a white short sleeve shirt, a tightly tied green tie along with matching slacks and socks.  In his other hand was a well-worn briefcase and a small selection of nicely-packaged, colorful bible samples and a stack of equally colorful trifold brochures.

Some very valuable lessons to remember this week as we dig into the critical summer months of the 3rd quarter.

Thanks, Jerry, on the very valuable sales lesson about the sales basics of executing, of closing the sale and of time management...and, of course, for selling me the 400th Anniversary Edition of the King James version with the majestic deep blue cover!

As a Sales Manager, at any level, if you need to create more Jerrys and amp up the productivity of your entire sales team, you should think about attending our next Sales Management Boot Camp on October 1st. These always-sold-out, highly unique experiences have received hundreds of very positive testimonials.  Click on below, and then give us a call to answer questions and hopefully sign you up. 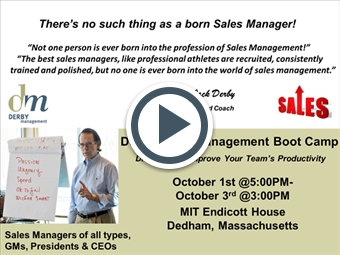