It's been a really great summer !

Lots of work, lots of time to do "field research", and lots of time to think about the upcoming four months of Sales and Marketing activities between now and the end of the year.

Each summer, I’ve had the pleasure of getting to know Jack McAvoy a little bit better every year. Jack’s a senior marketing exec at Parametric, but on the weekends, he becomes “Captain Jack”, head lifeguard, finder-of-lost-kids, keeper-of-the-peace and an all-around watchful eye over his charges-lifeguards and vacationers alike.

Bottom line of the Summer of 2013’s Lifeguard Performance against quota:

Not a bad way to wind down the summer for Jack, for me and for most of us.  Here's a  couple of related takeaways to think about during this last week of the summer of 2013.

In business, all of us need a lifeguard

Whether that relationship is a close personal friend, it’s a professional coach, or it’s a specific connection to someone you trust, can call without an appointment, ask “Do you have a minute?”, and the immediate response is “Of course”, we all need the ability to rely on someone else for their experience and objectivity.   If you haven't considered who that person could be, give it some thought over this long weekend, and then sit down with him or her during the next couple of weeks and openly discuss the idea.  One of my best learning experiences years ago, as a first time president, was to connect with a big name tech founder by just calling him up.  For the next few years, we met regularly in his office, which for me, was invaluable.

If the formality of having to identify a person with whom you can sit down on a regular basis is too daunting, then perhaps this fall and winter is the time that you put serious energy and commitment into a leadership position in a business association in your market.  Just something where you can gain additional objective perspective from peers.

It's hard enough running a business or managing a sales team today.  You shouldn't try to do it by yourself...especially given the rapid-fire changes in your marketplace.

With the close of Labor Day, it’s back at it, and back at it aggressively over the next four months as all of us try to squeeze even more critical activities into already over-packed calendars:

Like Clark Kent, Jack McAvoy shifts roles from Head Lifeguard to Senior Marketing Guy and hopefully once again will be back at the beach come next summer.

For me, it’s a shift back to the realities of running Derby Management, being the professor and gearing up for working with my partners at Common Angels.  All of which, I love, and all of which require just a bit of detailed planning in terms of time management.

Think about taking a quiet one or two hours (it doesn't take much) next week and literally map out the large categories of work that will require a significant amount of your planning commitment over the period of the next 100 work days or so.  Then block that time off in your Outlook calendar.  Color code it if need be, but do something visual so that you're going to make sure that that time block remains a priority rather than allowing it to become scrunched into "everything else".

This fall, think about hiring my Interns

As I look forward to my first classes next week at Tufts and MIT, I'm always on the lookout for solid opportunities to employ my best students, both full time and as interns.

Jack approached me last May, and as a result hired David from Tufts to work at Parametric.  A strong student anyway and the head of Imaginet, the Marketing association at Tufts, David did a superb job, has already acccepted an offer to continue interning at Parametric for the school year, and, most importantly, will receive a strong recommendation on his Linked In from Jack and from me.

Here's just a few initial guidelines from Jack McAvoy for you to pass on to your interns as they come to work for you this year:

Interested in hiring one of my interns, just send me an email at jack@derbymanagement.com?

Good selling this week as you close out the month!

The 2013 Sales Management Boot Camp-Click to the left

Take a look at our new Video-Presenters & Attendees 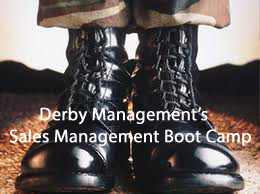