With a long weekend of maxed-out football from Thanksgiving Day high school to the Pats, I realize that I'm constantly comparing professional sports teams to professional sales organizations on the basis of....

No such thing as 5 minutes...and Sales 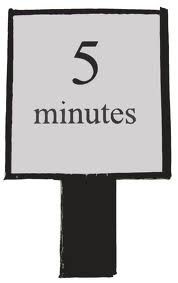 How many times a week do you hear that request for "just five minutes" of your time?  Maybe it's from your boss or a co-worker, or maybe it's a non-business friend or your spouse as in... "Can you help me for just five minutes?" (spouse translation: "Can you go to the drug store/shopping/cleaning out the closet for me?")

Brought in the last of the wood from up on the ridge last weekend.  Now, if Tom the Wood Guy shows up next week, four cords should do the trick for what is being forecasted as a heavy winta’.  Last Saturday, I asked the Boys on the Bench (all of whom were dressed out in various shades of camo given huntin’ season) down at the general store, and they’re all predicting a long season of tough storms.  Actually, I’m not really sure that I got a very accurate forecast since everyone, including the Chief of Police of our town (population 647), was embroiled in a hot and heavy debate regarding whether it was a good thing or not that the combination Mobil station/gun store down in Bennington was now selling modified AK47s.   Vermonters… you gotta love ‘em.

On my way to NYC on the Acela this morning.  Door to door, three hours, and I’m then plunked into the heart of Manhattan after working in an uninterrupted environment, having a not-so-bad breakfast and doing some quiet soul searching.  A perfect trip.

First and most importantly, my thoughts and prayers to everyone dealing with the aftermath of Sandy.