I Should Have...and Sales 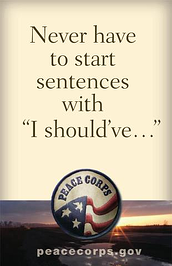 I had just graduated from BC and had a ticket to go to  the University of Chicago for graduate work where I would have studied some dusty, esoteric slice of Elizabethan writing, ending up as an English professor in a small college somewhere.  I still remember the look of shock and dismay x number of years ago now on a hot July afternoon when I announced to my father that I was not going to Chicago (which I did years later) and that I was leaving for Peace Corps training that September.  135 of us began language studies and survival training that fall in Syracuse (no better place, of course, to train in prep for equatorial Africa) and about 80 of us finally made our way to Tanzania's Dar es Salaam the following January.

For me, the Peace Corps totally changed my life.  Two years later, when I returned to the U.S. after teaching languages at a secondary school located in the daily shadows of Kilimanjaro, I knew what I wanted to do, the importance of business and commerce, the up close and personal reality of life and death and pretty much what my future would look like...and it was not teaching English literature in the midwest. Although, since I now do have the privilige of teaching business stuff part time at MIT and at Tufts, I have also discovered that there is nothing more rewarding than getting personal thank you notes from my students at the end of semester.

When my seniors approach me in the fall about their careers, and they ask about Teach America, the Peace Corps, Habitat for Humanity or just taking a year off to travel, my response is always the same, "Absolutely, go do it!"  One, there's no better time. Two, if not then, when? And, three, no one should ever look back at whatever age and say "I should have..."

The same goes for the world of Sales.  If you're thinking about a career in sales, no matter if you're a recent graduate or you're 50, now is the time to jump in and try it.  There is no more exciting, no more demanding, no more in-your-face-exacting, and no more rewarding a profession as a career in Sales!  On the first class of every semester, I tell my Tufts Marketing class of juniors and seniors that 35% of them will end up in sales and marketing careers.  Of course, no one believes that that will apply to them.  Five years later, I know that the 35% is low; it's more like 50%, and I can proudly point to numbers of graduates who work for my customers.

When I look at the most successful and most stimulating business people that I know, 80% of them are salespeople, and a few of them like Joe Gustafson at Brainshark, Jay Habegger at Owner IQ, Alan Facey at Black Duck, Ron Losby at Steinway, Chris Spafford at Ward Leonard and Dan Cignarella at Keurig, represent the best of class because they push themselves to explore, to break new ground and to consistently learn more about their profession as a manager.

So, as you're moving ahead at warp speed during these next two weeks to finish the quarter, take a couple of minutes separately by yourself and then also with your team and ask, "What is it that we absolutely must do/need to do for the balance of the year?"  Then get the team together and talk it through.  Just make sure that you're not sitting there in December and talking about the "should haves".

DERBY Management-Associated Industries of Massachusetts
SemiAnnual Sales Management Boot Camp
"Save The Date": September 30th-October 2nd, 2012
Click HERE for a quick overview and email me to set up time for a 10 minute call to talk about this unique experience.

“It was an outstanding program.” ; “A great mix of attendees.”; “Jack himself was very credible, very engaged in the business, and tied together real life, examples & stories.”; “I would rate it very highly and would recommend other senior sales leaders at MFS t go through the program.”; “It was time very, very well spent.”
Tom Jessee, Senior Vice President of Sales, MFS